Looking back at this years Scillies, it was really good. If I list the headline birds it probably goes down as the best out of the past 5 autumns Ive been staying on st Agnes. Although there were several days with little change and very few migrants and the majority of the action happened on almost every other Island plus the word on the lips of every birder we bumped into “Agnes is quiet…”

I arrived on the 5th of October, winds had been exclusively from the West although I was able to check in on a Red-breasted Flycatcher in the fruit cage on my first day on the island aswell as bumping into a Yellow-browed warbler and the usual Firecrests, Spot flys etc around and about but very little else.

The following day was a similar story with no real new arrivals until a striking juvenile Honey Buzzard flew in from the West over Porth Killier flushing the waders and alerting Laurence, Lee and I to its presence.

A Scilly tick for me and the bird was tracked over st Agnes and st Marys but not seen the following morning.

I had it in my head that I would be birding differently this year, I really wanted to find a Catharus Thrush and so spent more time sticking my head in bushes, behind sheds, checking the edges of fields throughly as well as sitting under the quiet pines and inside pittosporum hedgerows now and then. Imagine if it had paid off, sitting there whilst an Veery hopped out in front of me or imagine an Ovenbird walking into view … Graham found an Arctic warbler in our garden whilst having a smoke (and at first without bins!) Lee, Laurence and him saw it well but it wasnt seen again after.  More quiet days would follow with little of note, although the below Wryneck was sheltering under the next boulder over from me during a heavy rain shower on Wingletang one afternoon which was a nice moment.

A real bit of excitement on st Agnes was in the form of a call from Neil Wright informing us that his brother Paul had found a Blue-winged teal on the pool, we all went and had a look , A UK tick for LP and I, and I learnt abit about splitting them from cinnamon teal… 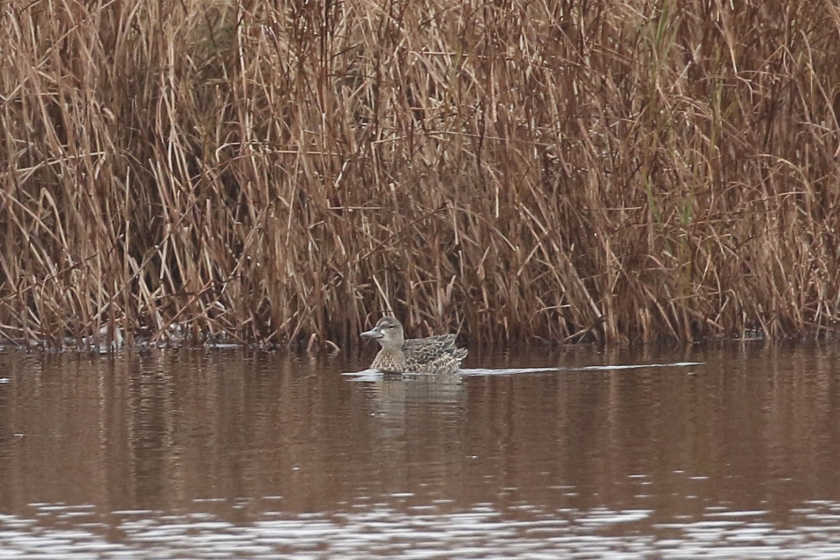 This Pink footed Goose was hanging around for my entire stay, seen some days to be feeding and other days flying around. It was nice to peek over the drystone wall and have a close look, its not often I get close to Geese! 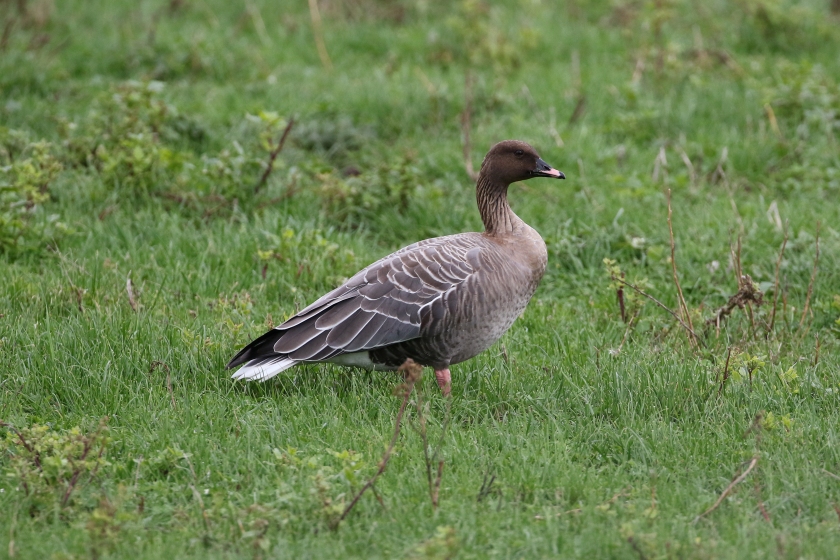 Our accommodation was abit split up with 7 nights on our beloved Roseveer cottage and our final 5 nights in the lighthouse garden gatehouse but the middle 2 nights were unknown. Graham, Laurence and I decided to upsticks and spend the 2 nights on st MArys where all the actiaon was happening. We caught up with the incredible Yellow Billed Cuckoo which showed down to 2 metres although partially obscured by sallows and almost impossible to get on at first. The Red-eyed Vireo (found by ex hackney birder Jonathon Nasir) was a treat, I really like Vireos and this bird showed well on a couple of occasions including coming into Grahams incredible pishing and calling back on occasion.

We stopped in on the fearless Spotted Crake that was arsing around lower moors a few times, each one was worth it.

later that day and Will Scott found a juv White-rumped sandpiper and If you can believe it, thats a world tick for me… So we made out way all the way to Bants carn where the bird was feeding and preening on a rotting pile of seaweed.

The next morning we all managed views of the Blue Rock thrush, found by scilly local and extremely nice guy Ren Hathway. Later a mooch around between the airfield and porth Hellick area held one or two Lapland Buntings, some common dolphins from the turning circle and what was certainly the Richard’s Pipit Rob Stonehouse had seen on the airfeild the previous day flushing from one of the fields above porth Hellick.

Whislt this had been going on the mega alert went of as news broke of a Rose-breasted Grosbeak on st Martins.. I knew it had to be the year of the next one since mine in 2017 and this was a 1cy male so we decided to carry on the twitching malarky and got the early boat over the next morning. An hour of standing around with the crowd waiting for the bird to show had Laurence and I considering packing birding in all together but as we walked away I picked up the bird in flight heading to the cricket pitch. 2 mins later and weve got it all to ourselves a couple hundred metres from everyone else, we put out the news and we made our way back to marys to return to st Agnes that afternoon.

Back on st Agnes with 4 days to make the most of the rest of the holiday but not an awful lot happening, Paul Rhodes had found a hard to see Subalpine Warbler near the hump which we eventually saw, it like many birds of the week had been seen badly more often than well although did call for a while recalling western subalp type tacking and I think Lee has a shot of the spread tail which showed very little white to t5, which i guess in combo with call suggests western.

One or two Snow buntings were seen and heard flying around wingletang and porthcoose. 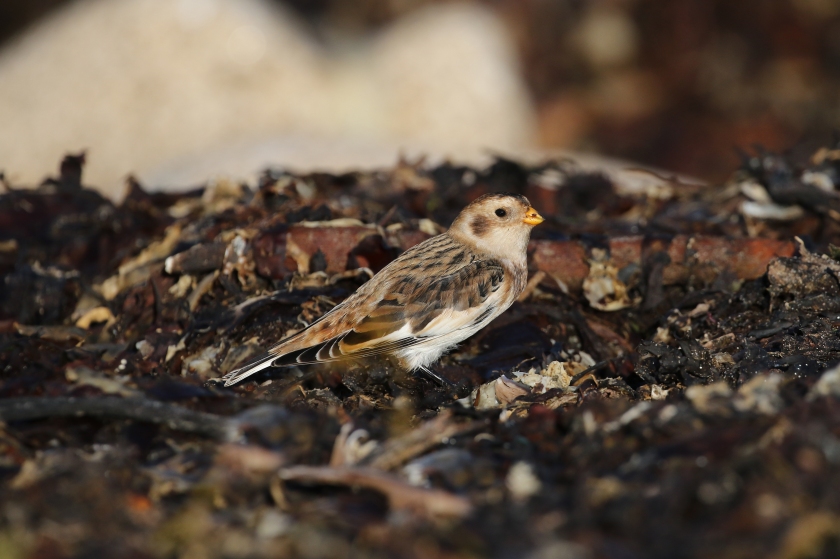 Our final morning and some adrenaline; the weather looked very windy and wet and we had prepared to be seawatching from some where. Graham had suggested checking the waters between islands and getting some shelter too.  Whilst walking around browtarth Graham Laurence and I flushed a small Actitis wader. Given the date, its short tailed appearance and inconclusive flight views of the wing bar, we knew we had to pursue the bird until we were confident of its identity.

The bird was flighty and would flush around corners, was keeping low and didnt give its self away initially. We stealthily pursured it over around 1km of coastline back and fourth however despite the rain, wind and terrain the distant views and photos I had taken were beggining to show the features; very short back end, be-spectacled appearance on a strongly patterned face, fringe barring confined to the wing coverts, plain tertials, smooth breast side ‘streaking’ and legs that against the darker seaweed looked a warm yellow, in flight the wing bar fell short of meeting the body of the bird – disappearing under the greater coverts: A 1cy Spotted Sandpiper. We put the news out on Twitter aswell as the islands whatsapp group. The bird ending up showing very very well and was enjoyed by most of the island.

later in the day rumours of the bird having been seen the day previous were emerging and it seems that someone had seen the bird but for whatever reason had not been able to clinch the id.  It had probably arrived on the weather system of weds night thurs am.

I usually have a causal glance through the Gulls on st Agnes and occasionally pick out a Yellow Legged Gull this year I had one or two adult birds (below) and LP picked out a second winter. 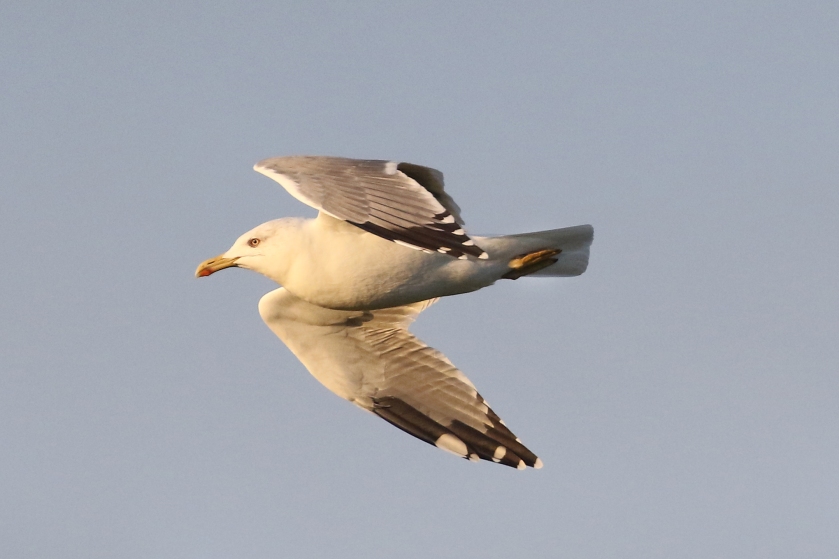